These are a few great cds for children about ballet. If you have any others that you like please let me know and I will put them on the site!

Saint-Saens: Carnival of the Animals 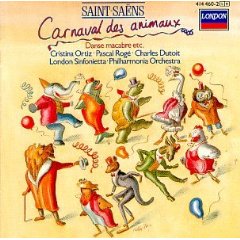 Amazon.com – CBS’s 1957 television production of Rodgers and Hammerstein’s Cinderella has the polished yet untampered sound of a live Broadway musical recording, despite the fact that the album was recorded in advance of the television broadcast. Julie Andrews stars as Cinderella, and her clean yet vulnerable voice perfectly suits her role as the picked-on dreamer in rags. The tracks play like a Julie Andrews showcase: her voice dominates the selections for both its distinctive qualities and the fact that she is featured in more songs than any other performer. The CD features four additional bonus tracks, including a piano version of “In My Own Little Corner,” sung by Andrews. –Bryony Angell