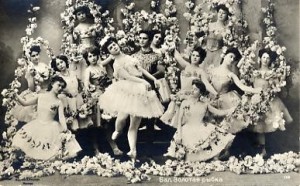 Photo of dancers in the ballet Le Poisson doré. Moscow, 1905

The Mariinsky Ballet, as it is referred to today was founded in the 1740s. It is based in the Mariinsky Theatre in St. Petersburg, Russia. When touring, the company is known by its former Soviet name, the Kirov Ballet. Today the Mariinsky Ballet has over 200 dancers and is one of the world’s greatest ballet companies.

The Mariinsky Ballet was originally formed as the Imperial Russian Ballet. It has since gone through a few name changes depending on the politics of the times. It was called the Soviet Ballet after the Russian revolution and then the Kirov Ballet after the assassination of Sergey Kirov in 1934.

The Vaganova Ballet Academy is named after Agrippina Vaganova who was a graduate of the Imperial Ballet School in 1897. The school has over 300 students with over 3000 that audition each year. The school teaches the Vaganova Method. Dancers of this method are said to dance strong and clean however they are able to keep a softness and grace on stage.